Markets and Governments: a Theoretical Appraisal

“Professor Hayek does not see, or will not admit, that a return to free competition means for the great mass of people a tyranny probably worse, because more irresponsible, than that of the State”, George Orwell: “A Review of The Road to Serfdom by F.A. Hayek”, Observer, April 9th 1944.

“It seems to be nothing more than simple and obvious wisdom to compare social institutions as they might be expected actually to operate rather than to compare romantic models of how such institutions might be hoped to operate. [...] The socialist mystique to the effect that the state, that politics, somehow works its way toward some transcendent “public good” is with us yet, in many guises, as we must surely acknowledge”, James Buchanan: “Politics without romance: a sketch of positive public choice theory and its normative implications”, Physica, 1979.

The discipline of economics occupies a central role in the social sciences. Its conclusions are a key reference in public discussions.
From a theoretical point of view, however, the foundations of the discipline appear far from being unambiguously established. Its basic prescriptions rest on assumptions which still deserve to be more fully understood and explicitly discussed.
The summer school proposes to reexamine a very classic theme in economic thought, the tension between markets and governments, from the perspective of contemporary economic theory.
Our starting point will be the conceptual framework which is at the root of standard comparisons between markets and governments: Government interventions can be justified when there are market failures so that potential gains from trade cannot be exhausted. This logic has broad appeal and has been a fundamental reference point in many policy domains. Examples include (i) Market power and antitrust regulation, (ii) Externalities and policies to mitigate climate change (iii) Free-rider problems in public goods provision, or (iv) Equity-efficiency trade-offs in tax design.
This approach is indeed biased both in favor of markets and in favor of governments.

Recent research on market design and incentive theory puts in question the traditional dichotomy of markets and governments. Markets can be designed in a way that serves distributive objectives, fairness objectives or desires to avoid the use of money as a medium of exchange.

At the same time, market pressures stand in the way when governments seek to reform financial regulation, mitigate climate change or enforce corporate taxation. These policy challenges seem to require a degree of market taming beyond the usual confines of taxation and regulation in market-based economies.

The school aims at offering a critical review of these recent issues. We will alternate traditional lectures by academics who have contributed to different areas of contemporary economic theory, with discussions around the presentation of recently published texts. In particular, the school aims to provide an opportunity to contrast contemporary economic theory with recent developments in political philosophy.

The school is organized over four days at Villa Mondragone, in Monteporzio Catone.
Each morning is devoted to lectures. Afternoons will feature presentations of alternative perspectives, from the viewpoint of the structure of property rights, taxation regimes, social justice. No background is required, although familiarity with analytical reasoning may help.

We expect to accommodate a maximum of seventy participants at the school. Interested participants should apply by filling the registration form. The deadline for applying to the school is March 1st 2023. Acceptance decisions will be communicated by March 25th 2023.

To ensure effective participation, and to guarantee that the available seats will actually be filled, the school requires a registration fee of 200 euros. However, we are pleased to announce the availability of several scholarships that will guarantee exemption from the tuition, for all the successful applicants without research funds.

To apply for exemption, please check the appropriate box in your application form.

Applications can only be submitted online through the >> online application form <<

Fiumicino Airport
From Fiumicino airport take the fast train (LEONARDO EXPRESS) to Termini railway station (departures every 30 minutes, first departure at 06:35, last departure at 23:35, ticket 9,50 €.
A taxi to reach Rome should cost around 40,00/60,00 €.
Frascati downtown can be conveniently reached from Termini central railway station by train. Trains nearly every hour; journey takes about 40 minutes. Tickets are available at the Station and cost 1,70 €.

From Termini Railway Station
Take the underground "A" to the final stop Anagnina (ticket 1 €).
From ANAGNINA underground "A" final stop catch a blue COTRAL bus direction Rocca Priora (bus-shelter n.° 6) to Monteporzio Catone and get off at the Villa Mondragone.
Frascati downtown can be conveniently reached from Termini central railway station by train. Trains nearly every hour; journey takes about 40 minutes. Tickets are available at the Station and cost 1,70 €. 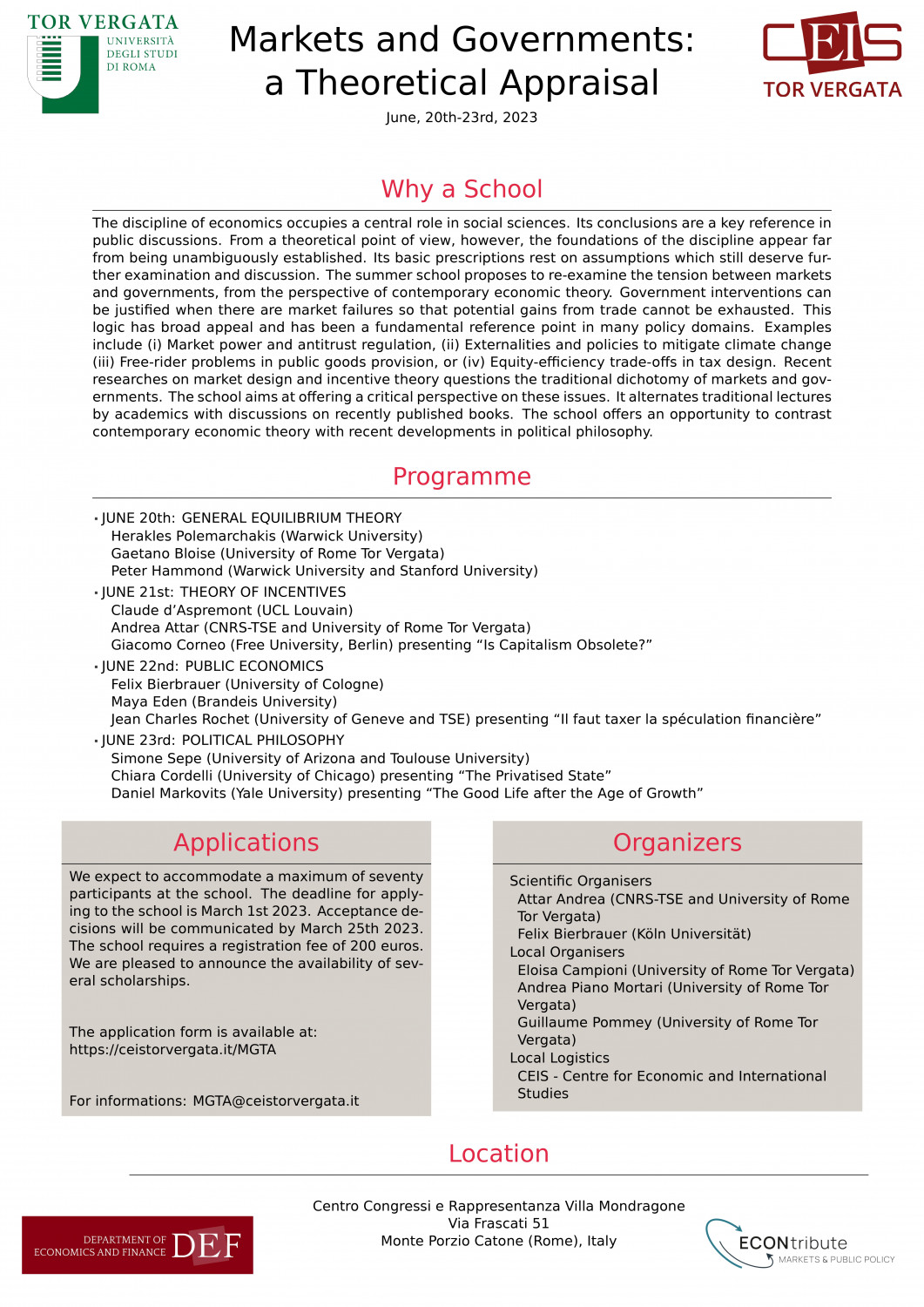